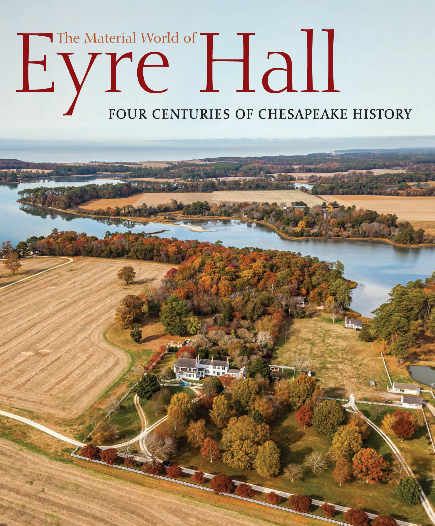 Built in 1759 by Littleton Eyre, Eyre Hall on Virginia’s Eastern Shore is one of only a handful of houses in Virginia today that is owned by descendants of its original builders. In addition, it retains a rich collection of family objects accumulated by several generations of Eyres. As a result, Eyre Hall is a microcosm of Virginia history. Drawing on anecdotes and information from his latest book, The Material World of Eyre Hall: Four Centuries of Chesapeake History, architecture scholar Carl Lounsbury will discuss the history of the property and consider its many legacies. The talk will be preceded by a reception and book-signing at Homewood Museum.

Carl Lounsbury retired in 2016 as the Senior Architectural Historian at the Colonial Williamsburg Foundation. Over a 35-year career there, he was responsible for long-term research projects such as the study of English and Colonial American public buildings, churches, meetinghouses, and theaters; and the terminology, practice, and technology of preindustrial building. He has also had an extensive career consulting with museums, historical and preservation societies, academic institutions, and homeowners in the investigation and restoration of historic buildings. Lounsbury earned his undergraduate degree in history and English from the University of North Carolina at Chapel Hill and received his MA and Ph.D. from George Washington University. He is currently Adjunct Associate Professor of History at the College of William and Mary. His publications include An Illustrated Glossary of Early Southern Architecture and Landscape and The Courthouses of Early Virginia, both of which won the Abbott Lowell Cummings Award from the Vernacular Architecture Forum. His most recent book is The Material World of Eyre Hall: Four Centuries of Chesapeake History.